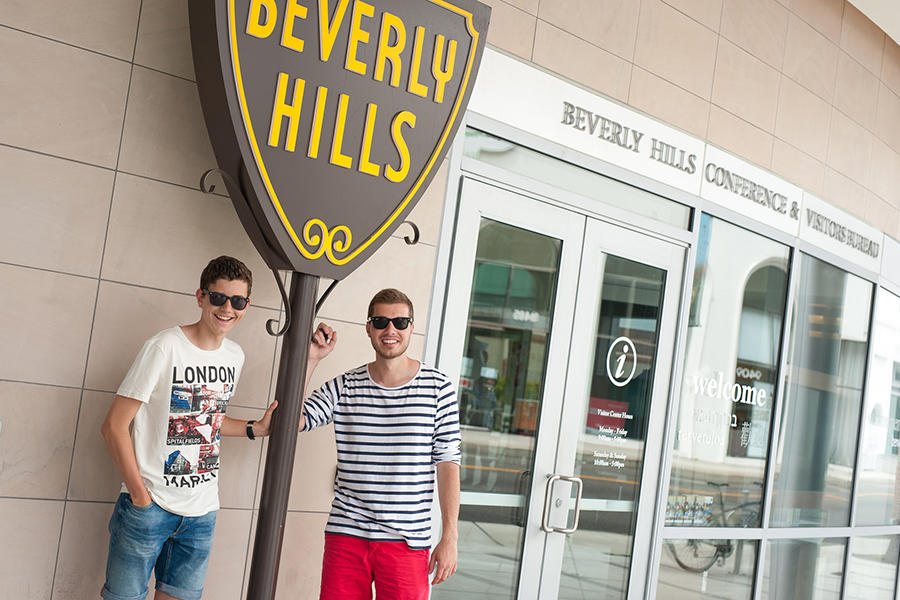 The Beverly Hills Visitor Center is located at 9400 South Santa Monica Boulevard, in the heart of the Golden Triangle. Serving as a gateway to the city and providing a host of customized services, this is a must stop when you come to Beverly Hills. We look forward to welcoming you to the center to plan your trip, help you shop for Beverly Hills branded merchandise and take advantage of our complimentary concierge services.

Whether you’re seeking a blissfully romantic weekend, a family trip of a lifetime or an event to remember, only in Beverly Hills will you find culture, luxury and fun all in one fabulous city. Our Inside Beverly Hills guide outlines local favorites and includes a full-day itinerary.

Without question, Beverly Hills has had a long and storied past. Dating back to the mid-1700s when the first Spanish explorers came upon the native inhabitants of the region, the Tongva, this land was treasured for its most precious resource - water. Hence, its early name - El Rodeo de las Aguas (or Gathering of the Waters). Initially ranch and farmland, the region later transitioned to lima bean fields in the late 19th Century and then was developed as residential property and, ultimately, the "home to the stars" in the 1920s and 30s. It started with Pickfair, the famous estate built for Douglas Fairbanks and Mary Pickford, the "darlings" of the film industry at the time. Soon, others like Will Rogers, Rudolf Valentino and Tom Mix followed. The allure of Beverly Hills and the desire to reside in this community is as strong as it ever was.

Today, Beverly Hills is a 5.7 square mile city with 35,000 residents and a daytime population of more than 200,000. The ties to the entertainment industry remain strong. The city's 900 retailers serve as emporiums to the stars, many celebrities and industry giants live here and powerhouses such as William Morris Endeavor Agency, United Talent Agency, Merv Griffin Entertainment and the Academy of Motion Picture Arts and Sciences all call Beverly Hills home. Since 1974 and with more than 30,000 square feet of red carpet, The Beverly Hilton has welcomed celebrities and Hollywood's elite to the annual Golden Globe Awards, held in its famed International Ballroom. Stargazing is a national past-time in this town - see for yourself during a day of shopping in our luxury boutiques or while dining at any one of our acclaimed restaurants.